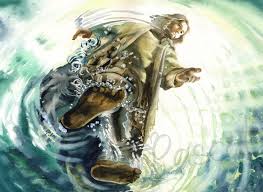 Are you waiting for your miracle to come? During devotionals this morning my husband reminded me of this scripture passage in Luke 8. I believe it is a prophetic word that I think will help you!

Jesus had just driven out Legion from a man in the Gerasenes, sending the demons into the pigs. The people then turned on Jesus and drove Him out, as they were “possessed and suffering with dread and terror,” (Luke 8:27 – 37 AMPC). Next thing you know, He was approached by a man named Jairus, a ruler in the synagogue. His daughter was dying, and he asked Jesus to come and heal her, (v. 41-42). However, on the way, his journey was interrupted by the woman with the issue of blood. She reached out to Him in faith, believing if she could just touch Him she would be healed, (v. 44). Jesus felt her faith pull the healing virtue right out of Him (v. 46), and she was healed.

Next scene, one of Jairus’ associates showed up and told Jairus that his daughter had died (v. 49). Immediately, Jesus said, “Do not be seized with alarm or struck with fear; simply believe and she shall be made well,” (v. 50). They all went to Jairus’ house, where Jesus only allowed the BELIEVERS in with Him and kicked everybody else out. He then called her out of death back into life and ordered that she be given some food.

Okay! So what does this have to do with your miracle? I believe these two intertwined stories show us some things:

The good news is that you can also be possessed by BELIEF! Belief can seize you and make you its own! Let it! The people with the pigs were POSSESSED by dread and terror. Don’t let the enemy possess you! Let the goodness of God possess you instead! Let BELIEF possess you. It’s a choice, a paradigm switch, and we must choose to get into belief rather than get into fear. Belief = Faith, and faith is the currency of heaven.  Remember, a double-minded man gets nothing (see James 1:8). I want it all, don’t you?

So here is the second way this impacts your miracle – Jesus is on His way. Yes, I know I already said this, but it bears repeating! Maybe He purposely let your dream die, like Jairus’ daughter or Lazarus, just so He could resurrect it after so long in front of all your naysayers, all your doubters and all your critics! Jesus is on His way! Maybe He was on His way to your house, for you to get your healing, but some other person stepped into line in front of you and grabbed ahold of His virtue first, seemingly taking up His time and stopping Him.

Did He run out of healing virtue? NO! In fact, not only did the woman with the issue of blood get healed, His healing power was so multiplied that He not only healed the next person, He brought her back to life! And He’ll do it for you, too! If this is God’s blueprint, let’s pray that Jesus gets interrupted again and again on His way to us! I want it all, resurrection-power multiplied to maximum capacity! Don’t you?

“Is anything too difficult or too wonderful for the Lord? At the appointed time, when the season [for her delivery] comes, I will return to you and Sarah will have a son.” (Genesis 18:14 AMP)

Be possessed today, because Jesus is on His way!

Sharing your faith with you!