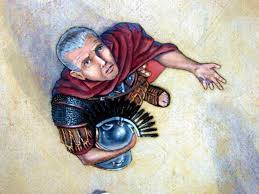 In Luke 7:7 the centurion said to Jesus, through some friends,

“7 Neither did I consider myself worthy to come to You. But [just] speak a word, and my servant boy will be healed.”

Speak here in Greek is LEGO, Strong’s 3004 légō (originally, “lay down to sleep,” used later of “laying an argument to rest,” i.e. bringing a message to closure) – properly, to say (speak), moving to a conclusion (bringing it to closure, “laying it to rest”).

I love how God speaks on so many levels simultaneously! The book of Revelation says that His voice is the voice of many waters, so I am always looking for Him to layer meanings when He speaks.

So, it is important to note that LOGOS comes from LEGO – both words mean conclusion – or, it is finished! That means that God’s Word (LOGOS) has the FINAL WORD (LEGO) – the final say so! It is Finished-Finished!

On top of that, the number 7 means Finished as well! So, in Luke 7 (Finished) verse 7 (Finished) the word uses LEGO and LOGOS, Finished-Finished!

What God is trying to tell us through this tiny passage of scripture with the HUGE MEANING is this: we need to grasp the concept the centurion knew experientially…he spoke and things happened – BECAUSE HE HAD THE FINAL SAY-SO! Not just because he spoke, but because of his AUTHORITY wrapped up in his words, coupled with his KNOWLEDGE (belief, faith) that whatever he said would happen!

We MUST understand that we have authority given to us by God Himself. When we open our mouths, Jesus comes out – or at least His authority does, wrapped up in our words!

Here’s what it means to us, as His children, the body – we have WAY MORE POWER to change the world than we are currently utilizing! The difference is knowledge that we have it and belief that it will work. Simply put, have Faith like the centurion’s!

“For I also am a man [daily] subject to authority, with soldiers under me. And I say to one, Go, and he goes; and to another, Come, and he comes; and to my bond servant, Do this, and he does it.”

We already know that we have authority, and that we are to use it. But here is an extremely important nuance – the centurion said that his authority was the same kind of authority that Jesus had. READ IT AGAIN! He said, “For I ALSO am a man SUBJECT TO AUTHORITY with soldiers under me…” He saw Jesus as the General of His Army, with soldiers under him – just like him! He acknowledged that his servant’s sickness was under Jesus’ command, and that it MUST “GO” when He said so!

The definition of the Hebrew word for COMMAND implies words of force or power as a General commands his troops. This includes the TEN  COMMANDMENTS! We have always been intended to be His army!

”By this we come to know (perceive, recognize, and understand) that we abide (live and remain) in Him and He in us: because He has given (imparted) to us of His [Holy] Spirit,” (1John 4:13 AMPC).

By using our God-given authority, we open our mouth and Jesus comes out; therefore, when we tell pain, sickness, infirmity or cancer to go, it goes. It has to, because it is under our command! Change your mind! Simply BELIEVE it will happen!

Now, let’s move on to making things COME to us!

“For I also am a man [daily] subject to authority, with soldiers under me. And I say to one, Go, and he goes; and to another, Come, and he comes; and to my bond servant, Do this, and he does it.”

It is the same thing, just a different command! We open our mouths and Jesus comes out! We tell finances to COME, and they must COME, because the Word of God has the final word!

Just like the centurion, acknowledge that ALL FINANCES are under Jesus’ command – and He is in you! Need money? Talk to it! Tell it to come! Speak it in! Need a new job? Speak it in! Find some scriptures and decree them, speak them, sing them! The Word of God is all-powerful and has the Final Say! Lay the argument to rest! Finish it! Speak the word – Lego Logos!

“Fear not, little flock, for it is your Father’s good pleasure to give you the Kingdom,” (Luke 12:2).

Most importantly, BELIEVE IT!! You must believe it BEFORE you see it. You must KNOW that your authority is the “God kind” and He gave it to you, straight from the throne room of the Kingdom of God. You MUST know that your authority is Jesus’ authority, and not just something that jumped in your head. Open your mouth! Decree a thing! Take authority over the commands your soldiers are obeying. Give them proper, biblical marching orders. You will be victorious, because the Word is victorious! It is finished!

Much love and HUGE blessings in this new year!